Take a wander through the residential streets of Brighton (or Hove–actually) and you’ll quickly come across the rows of Victorian, bay-fronted homes the seaside town is known for. Take a closer look inside, and you’ll find at least a handful of houses on every street with wooden plantation shutters, many of which Shutterly Fabulous are proud to have expertly measured and fitted.

Our origins started as a Brighton shutter company, dressing many windows and smartening the exterior of properties across East Sussex. But shutters don’t just make an impact on the exterior, it’s what’s on the inside, as interior blogger Jasmin shares…

Today we’re delighted to be joined by Jasmin Robertson, who writes the interior blog Brick Dust Baby A few years ago Jas bought her home in Poet’s Corner, Hove, calling on our team of East Sussex shutter specialists to help her make the exterior of her home fabulous. We quizzed Jasmin about the transformation of her home’s exterior, about all things colour, and smartening the building, but also got the chance to discover more about what’s on the inside, her decor choices, and how she’s made her home a tranquil yet colourful space for her family…

Hi Jas, it’s great to talk to you today. Tell us a little bit about you, your blog, where you live, and how you came to own the property you live in.

Hi, I’m Jasmin, I live with my fiancé Liam, our six-year-old daughter Molly and our French Bulldog Worley.

We bought our house in December 2014 from a family member. We got a really good price as no work had been done on it in over 20 years. I think the owner realised selling privately to us meant avoiding the embarrassment of having to put it on the market! It was a complete wreck.

We’re not afraid to get our hands dirty so renovating appealed to us. It was a great opportunity to live in a decent area, near to a school we wanted Molly to attend. It was a big step up on the property ladder from my one-bed flat in Brighton, but my word we worked for it!

We live in a lovely neighbourhood known as ‘Poets Corner’ in Hove. I actually grew up here so have known some of our neighbours since I was seven years old. I’ve seen the area evolve and improve drastically in that time. It’s definitely now far more desirable!

I started my blog and Instagram (@brickdustbaby) as a way of documenting our renovation progress and I’m so glad I did. Whenever I’m feeling frustrated or stuck in a rut, I look back at early photos to remind myself how far we’ve come.

We’ve loved following your renovation on instagram – in particular the exterior of your home. What did the outside of your property look like when you moved in, how did you improve it and why?

The outside of the house wasn’t actually too bad in comparison to the inside, but it was still pretty dire. The front wall was bare brick and breeze block where it had been rebuilt at some point but never finished, the path was cracked, and the exterior paint was flaking. I also remember the front door had swollen through the winter months, so we had to really kick it to get it to open!

The first work to the front of the house was replacing all the windows. Many were leaking and so old the UPVC frames had turned yellow. We replaced them with UPVC sash and cord windows, they were the more cost-effective way of reinstating the bay windows, in-keeping with the house, which was built in 1901. 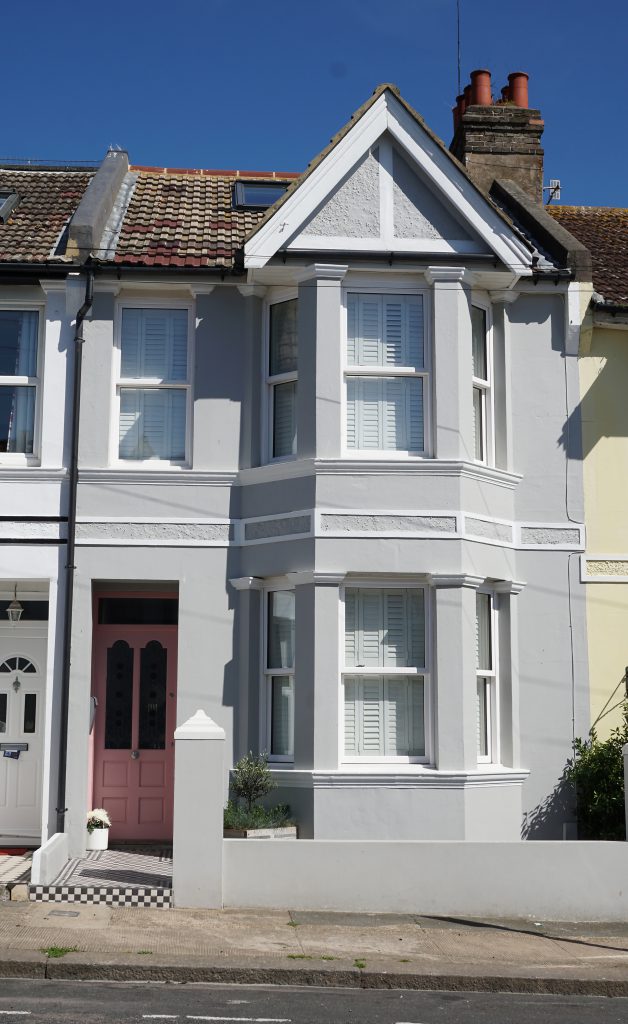 We had the front wall rebuilt and rendered and paid through the nose to have a new ‘pier cap’ cast. That’s the shaped point on top of the pillar in case you were wondering! Ours was the only house on the street with it missing so the moulder took a cast from a neighbour’s house.

We hired scaffolding and painted the front of the house ourselves. It took ages as we attempted to do it during winter and quickly discovered paint doesn’t dry in temperatures under 5 degrees. Amateurs!

Our front door was sourced on eBay. It took months to find the right one and we drove to Southampton to pick it up. We had the stained glass removed and restored and a layer of safety glass added for support.

One of the last jobs was tiling the path. We went for the classic Victorian black and white chequerboard, which looks really smart. And of course, then we had our plantation shutters installed to both of the bay windows which finished the look inside and out.

“We’ve had neighbours come and tell us we’ve taken the house from the worst to the best in the street, which was lovely to hear.”

You’ve done a fabulous job. We love the way you use colour throughout your home which reflects through the exterior. Do you have any tips for busy homeowners to make an impact with colour?

We’re getting braver with colour as time goes on, at first everything was white! Generally, we now stick to foundations of natural materials and neutrals and add in smaller pops of colour. The accent colour on the front exterior is the front door which is painted bright pink in Nancy’s Blushes by Farrow & Ball.

If you’re experimenting with bolder shades, my tip would be to start off with smaller items or areas that are easier to redecorate or change. Brights catch your eye more so in my experience this can mean you get bored of looking at them. The colours in my house that have stood the test of time are the ones I really love – mainly pinks and greens.

Artwork is also a great way to add colour to your home. I love art and the pieces in our house bring in various different colours – but they were all bought for love, irrespective of how they might tie in with the décor. 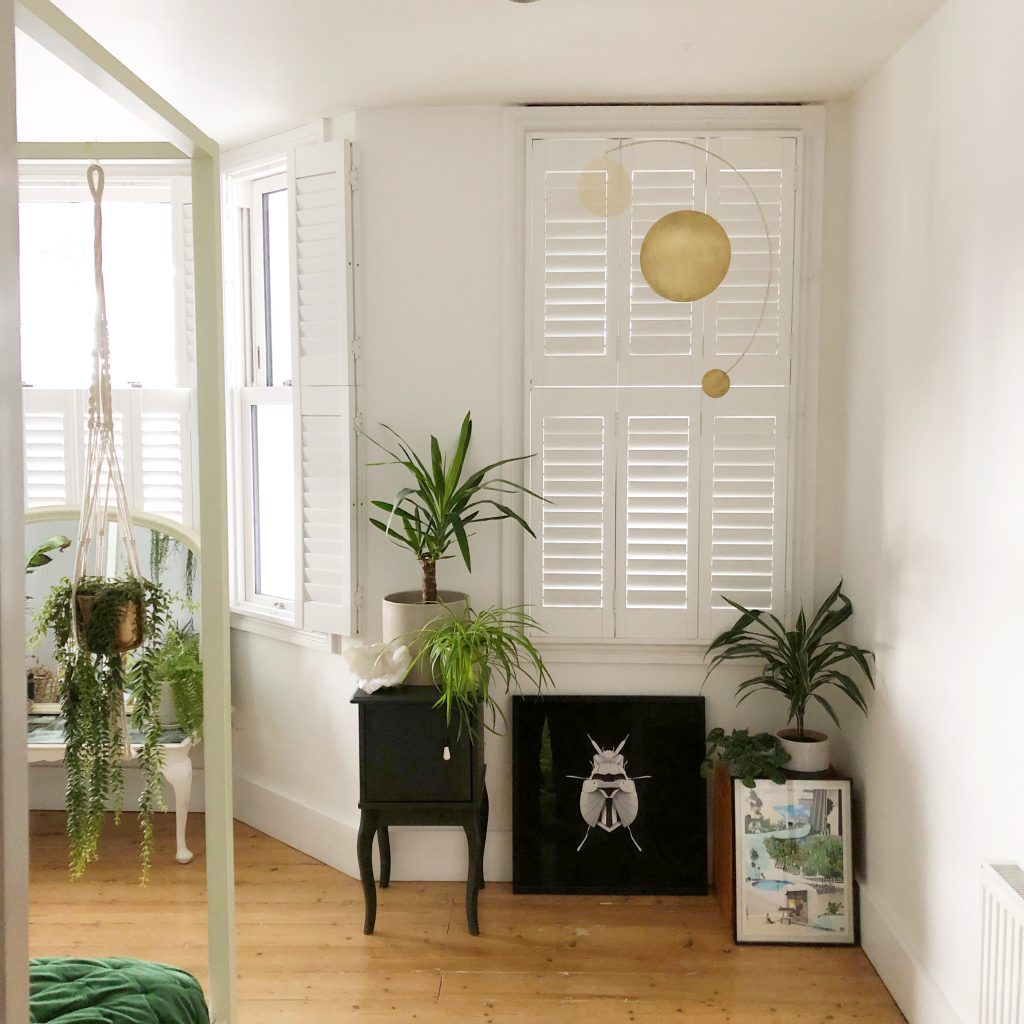 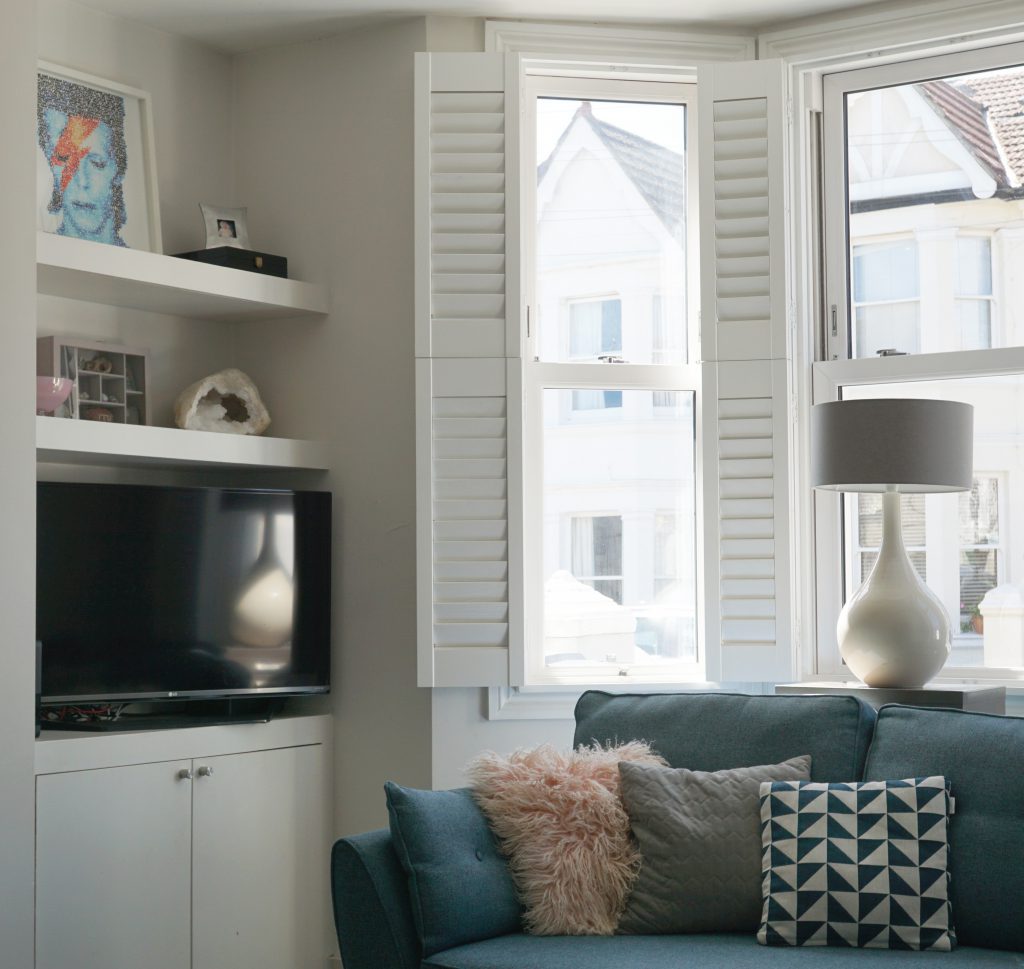 Your shutters look stunning inside as well as out and really complement all the colours you use elsewhere in the rooms. What made you choose to have a full-service installation for your plantation shutters as opposed to other window dressings?

Soon after the new windows were installed, we began thinking about window dressings. There are so many options. I have an aversion to curtains – too fussy – and had long swooned over houses with shutters. I always thought they looked so smart but never thought we’d be able to afford them.

We shopped around for quotes and were met with some eye-watering numbers. What’s more, we were told we’d have to rip out the new architrave we’d just installed around our new windows. Luckily friends of ours had used Shutterly Fabulous and what they paid was miles off the quotes we’d been given, plus their shutters were fitted within the architrave… hope was restored!

When Shutterly Fabulous came around to quote we instantly liked the shutter specialist. Knowing our wonky Victorian house and the tricky bay window, we were nervous as the measurements needed to be ultra-precise. We asked loads of questions about what would happen if the shutters didn’t fit but were completely reassured.

You chose our Premium Elm, tier on tier shutters in both your living room and bedroom. What enticed you to choose this style and what do you love most about them when you’re using them day to day?

Having tier-on-tier shutters makes them so much more versatile. I love that we can open the top to let in light but still maintain our privacy.

The front of our house is east-facing so the light moves around a lot as the day progresses. The shutters are so easily adjusted and give us better control over the light that we just wouldn’t get with other window dressings.

I also think having shutters in all windows at the front of the house (top and bottom) looks so smart.

It’s great to hear that you love them! Do you have any tips for homeowners who may be choosing wooden shutters for their homes?

Before you make any final decisions, have a good look around other people’s shutters to see what you like and don’t like. Also think about the room you’ll have them in and the type of windows they’ll fit onto.

When do you usually use the room and how does the light fall through the windows at different times of day? Are you overlooked? All these factors will determine which options are best for you which a shutter specialist will be able to advise you about at an appointment. The rest, like colour and finish is down to preference.

Push rods for example – some people like them, some don’t. I really don’t. I found only a few companies have the hidden rod option, Shutterly Fabulous being one of them. I love the clean lines. Also, I’ve noticed even with push rods, guests tend to use the slats anyway – so better to have them reinforced with the concealed mechanism in my opinion.

Regarding colour, we played it safe and went for Bright white but there are so many stunning colour options available now. As shutters are an investment, I’d make sure you’re certain on colour before committing to a stronger shade… just in case you go off it. I wouldn’t advise ever trying to paint your shutters! 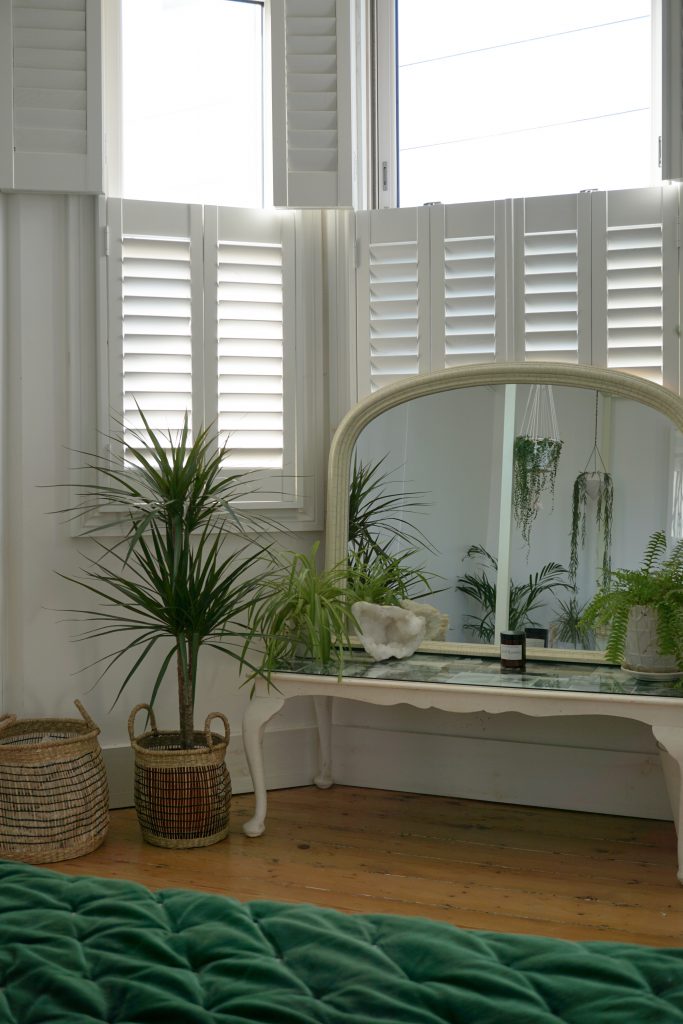 How do shutters compare to other window dressing you have in your home?

As I mentioned earlier, I have a real aversion to curtains, so you won’t find them anywhere in my house! Aside from the shutters, we have Velux blinds in our cinema room – they’re actually pretty good but as with the shutters, it’s the made to measure element that makes them work so well.

Elsewhere in the bedrooms and office, we have cut-to-fit roller blinds. They’re cheap and cheerful and do the job, but they’re not the best. Thankfully as they’re all at the back of the house no one can judge us!

Go on, give us a hint, do you have any other home projects on the horizon?

Always! We’ve not long since completed the loft conversion so we’re now on a mission to refresh the rest of the house. Next week we’ll start redecorating the hallway and living room – both areas moving away from grey.

I’m also completely transforming Molly’s old room into my home office. The walls will be painted in a combination of neutral lime paint shades to create a beautiful ombre effect.  I’ve sourced a gorgeous mid-century desk which is due to arrive towards the end of the month. Of course, I’ll be sharing progress over on Instagram where you can see the plans all come together. I’m just so excited at the prospect of no longer working at the dining table! 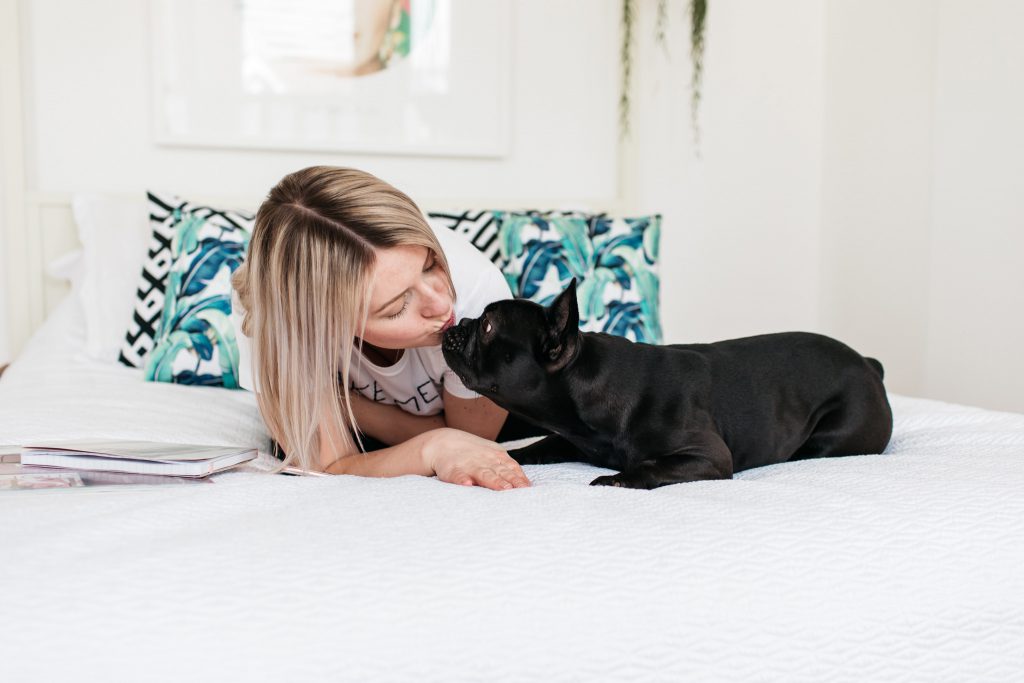 And finally, what’s the best piece of interior advice you’ve ever been given?

I didn’t have to think about this for long – all the best bits of advice have all come from Joa Studholme, Colour Consultant at Farrow & Ball. I went to one of her talks a few years ago and soaked up all her advice like a sponge. I’ve applied so much of it in my own house, from darker trims with lighter walls, to painting rooms all in one colour. I condensed it all into a post on my blog and always refer back to it when I’m decorating.

Thank you for allowing us to interview you today Jasmin! Take a look at Jasmin’s blog Brick Dust Baby for more interior inspiration, or follow her on Instagram @brickdustbaby.

Are you looking to fit shutters to your home in Hove, East Sussex or elsewhere in the UK? Book a free appointment with your local shutter specialist today. See a map of locations we cover.