Skip to content
COVID-19: We are open and carrying out appointments safely. Visit our blog for more info.
MADE TO MEASURE Bespoke, high quality window shutters 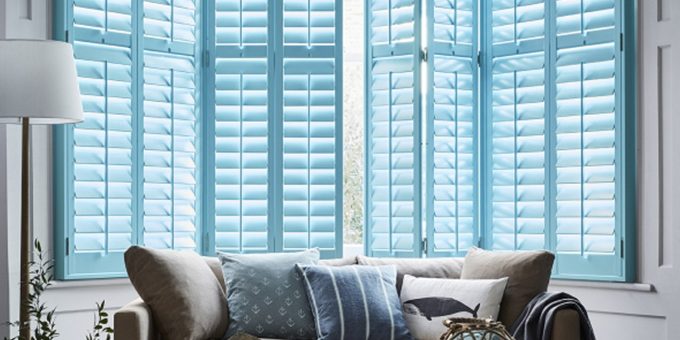 Though they’re much-coveted, bay windows can be challenging to dress. Here’s how to make the very most of their curves and angles – plus the extra space they give your room.

A staple of period homes, and a welcome feature in more recent builds, bay windows boost the sunlight inside a room to space-stretching effect. They add actual floor area, too, as they protrude from the line of the building, which can prove useful in planning both the layout and look of the room.

What’s the best way to dress a bay window?

Bay windows can have a flat front and angled sides, the so-called canted shape; a square bay shape (where the sides are perpendicular to the flat front window); or follow a curved bow shape. Variations on the theme include bays with additional facets, and the triangular bays with two windows.

Shutters are a stylish and effective window treatment for bay windows. They can be made to fit the frames precisely, so the window can be dressed for maximum light control, as much privacy as necessary, and style.

Choose plantation shutters for bay windows, and the louvres mean you can make the subtle adjustments that are needed throughout the day at each of the elements of the bay as the sun moves round the house, preventing glare but letting in maximum light. As bay windows are often found at the front of the house, shutters are also the best way to stop passers-by looking into your room without losing daylight.

Tall bays can benefit from tier-on-tier shutters, so top and lower panels can be operated independently. Or you might prefer café-style shutters, which cover only the bottom part of the window for privacy, optimising light coming in through the top of the glass. Solid panel shutters are an option for bay windows, too. Try them in bedrooms to stop street lights and early dawns disturbing sleep.

Will shutters give a bay window period style?

If you want a traditional look, choose narrower louvres for shutter blinds hung at bay windows. They’ll complement a room that has period features like ornate cornicing and a ceiling rose. It’s best not to go for the very smallest louvre sizes, though, as the scale of bay windows lends itself to medium widths upwards

Like the idea of giving the room a more modern twist? Choose wide louvres (shown above) and the window treatment will look contemporary without clashing with any period features in a Victorian or Edwardian home. Bear in mind that proportion is everything: the widest louvres look best against large expanses of glass and used on tall, wide shutter panels.

A bay window’s a fantastic focal point for a room scheme, so why not make it even more attention grabbing? Choosing an accent colour for the shutters will show off the window’s assets. You can pick up the shade in other furnishings to pull the look together. Even more spectacular? A two-tone effect (shown above) that’s like a large-scale artwork for the room.

North-facing room that’s dark? White shutters could be the cleverest option if you like using the room during the day as they’ll help bounce light around.

What furniture should I put in the space?

If your bay window’s sizeable, the nook might be perfect for the sofa, leaving more of the remainder of the room’s floor on show and making circulation through it easier. If it’s not the right position for the family sofa – maybe it’s awkward to put the TV opposite – think about putting a luxury seat like a chaise in there.

A less sizeable bay can still be home to an armchair, or you might be able to fit in a love seat – a supersized armchair that’ll make the room look more comfortable. Alternatively, think about making the bay a cosy nook that takes advantage of the view outside with a pair of chairs and side table in between so two of you can grab a coffee there.

If large pieces of seating won’t fit, a freestanding bench under the window can provide storage as well as a perch, or get a carpenter to build a seat that follows the sweep of the bay for capacious stash space.

Should I put a dining table in a bay window?

A bay can be just the right shape for a dining table – even if the bay itself is angular. Look for a round or oval-shaped table to fit tidily within its lines. Check the diameter of the table before you move furniture into the room or buy new, though. You’ll need enough room to move the accompanying chairs in and out as you sit down and stand up as well as to accommodate the table itself.

If your dining table is too big to fit the niche, it might still be worth positioning it towards the bay so you can take advantage of the extra space the window’s design creates for moving chairs on the window side in and out.

Which accessories should I put in a bay window?

Don’t leave a bay window empty even if the layout doesn’t work with seating or a table. It’s a great space for a display of plants. The latest trend for home greenery is to show off big groupings of different-shaped foliage that really make an impact, and a bay’s a great frame for one. If your plants aren’t tall, a narrow shelf can raise them up to eye level.

Don’t forget the outside of the bay, either. Dress it with window boxes to draw attention to its lovely lines from the street. With the louvres of your shutters open, you’ll be able to appreciate the blooms from the inside as well.